The question below was posed to me on our facebook page recently (if you don’t “like” the page already, please do so here and I thought it might be valuable to talk about the answer here on the blog.  So lets get down to business.

Question for all of you Olympic lifters. I have heard many times when performing a power clean that the upward jump movement should begin when the bar crosses the “Hit” zone. Where exactly is this on the thigh? I am not sure if it is where the bar lays across your quad at full arm extension or not. I want to make sure I am performing this move correctly, and also prevent injury in the future. Thanks. 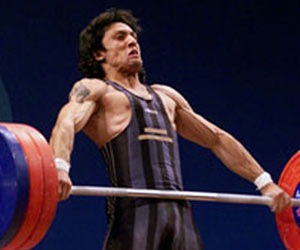 Is this guy in the “Hit” zone?

Lets first start with what the hit zone is. Although I have never called it the hit zone, I believe JD is referring to the 2nd pull of the clean or snatch.  The 1st pull is, of course, when an athlete initiates the movement off the floor and is usually fairly slow. The 2nd pull on the other hand is much more active and should be aimed at making the bar move at a maximum velocity upwards. Weightlifters choosing to catch in a low position also have a 3rd pull where they  “pull” themselves under the bar to catch in the bottom of a front squat position.  Today though we are talking about power cleans and the 3rd pull is minimized when performing the power variety of cleans.

So moving on to his first question: should the 2nd pull initiate when the bar is at a point at the top of the thighs when the athlete’s arms are at full extension? And to a further extent what does this look like?

At the point JD is talking about there should be triple extension of the ankles, knees and hips propelling the athlete upwards and even leaving the ground.  This is the point at which the bar is moving with its maximum velocity, but an athlete cannot wait until this point to aggressively move the bar upwards, this should actually happen much earlier.

The “Hit” zone in this case should start just above the knees, and from that point forward the athlete should be attempting to accelerate the bar to a maximum velocity until that point in which their arms are fully extended and the bar is laying across the top of their thigh.  This completes the 2nd Pull. This aggressive thinking starts in the 1st pull, off the floor, but moving the bar from a stop makes bar velocity less of a factor at the very start of the lift.

Pyrros Dimas, in the video above does a tremendous job of creating  constant acceleration of the bar and hitting the best triple extension positon I know of.

Many athletes make the mistake of waiting until the very top of their thigh to start aggressively pulling the bar, by this time it is too late.    The bar is moving too slowly and will be too difficult to accelerate to the velocity needed.

I find though that this wait and pray approach to the Olympic lifts is often the norm for athletes that have had prior experience with the Olympic lifts.  To re-teach them an aggressive pull that starts just above the knee, I have athletes start in the dead hang position just above the knee.  From this stopped position they must start accelerating immediately and be aggressive from the start of this pull, there is no chance of a made lift if they wait too long.

So in summary, although I have never called it the Hit zone, I believe that it is an accurate portrayal of the aggressive and violent nature of the 2nd pull in Olympic lifting.  The Hit zone though is much larger than JD suspected and should really start just above the knee and continue to full triple extension. If you or JD apply this type of thinking, I know that you will see dramatic increases in your power clean and power snatch.

You Can Come out of