By beforcefit
Posted October 12, 2010
In Uncategorized
Re-Thinking Athlete Conditioning2010-10-122019-10-29https://forcebloomington.com/wp-content/uploads/2016/12/logo.pngforcebloomington.comhttps://forcebloomington.com/wp-content/uploads/2016/12/logo.png200px200px
0
0
Ten to fifteen years ago the many athletes spent the conclusion of practice or many off-season days logging mile after mile of low intensity jogs to “get in shape” or improve conditioning for the upcoming competitive season.  Athletes in sports such as football, basketball, and soccer were told that they had to have an “aerobic base” in order to be successful in their sport.

Fortunately for high school athletes, coaches have since been clued in on the idea of training anaerobically.  Today, most pre-season conditioning and in-season conditioning routines consist of a series of linear sprints, sometimes of varying distances, but typically some sort of repeated sprint.

Establishing an anaerobic base of conditioning is absolutely the right way to go, and is much more important for most sports than purely aerobic, low intensity jogs, but often times coaches implement this type of conditioning in the wrong way.

Step out to 95% of practices or workouts and you will see coaches lining up their players on the baseline or goalline and instructing them to sprint. Once they reach the finish of the sprint, they are instructed to walk back and sprint again, or to turn around and sprint to the start line.  This situation can certainly improve conditioning but does it improve conditioning in the right way? Does it really have any application to the particular sport? 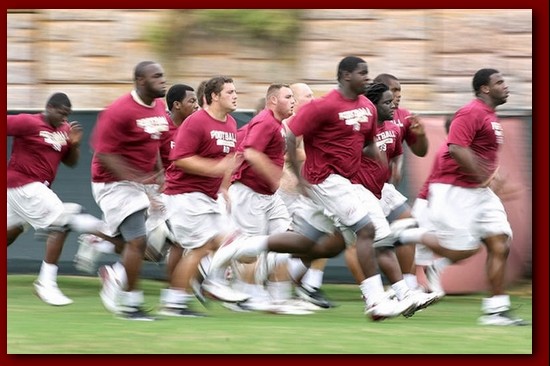 No Miles for these Big Fellas!

On both accounts my answer is NO.

Among sports scientists (read: people much smarter than me) the widely held belief is that the best preparation for competition is training that closely mirrors competitive performance situations.  In a typical game situation, athletes in field sports rarely sprint for distances of greater than 20 yards and rarely for times greater than 4 seconds.  In court sports this time is usually even less, and due to the constraints of the playing area the distance is much less as well.  Time-motion analysis of soccer, field hockey, rugby etc show that athletes sprint for 4-5% of the game time, high speed jogging accounts for a greater percentage of time but the primary activity for athletes was walking, jogging, and low speed running (1). In sports such as football most time is spent standing, although unaccounted for high intensity activity like tackling or blocking should be considered when designing conditioning programs.

Regardless of sport, sprinting, followed by sprinting, followed by more sprinting does very little to condition the athlete appropriately.  Athletes need appropriate rest intervals to get the maximum return from their conditioning.  A 2:1 Work to rest ratio, or less will leave the athletes using energy systems that have little to no bearing on their performance in competition.  To do it right athletes should have rest intervals of at least double the work intervals. Rest Periods can be active, but should nonetheless, never equal the work intervals.

You Can Come out of